November is popularly known as NO-SHAVE NOVEMBER or even MOVEMBER. The idea is usually to raise prostate cancer awareness among men by encouraging them to not shave their beard for the entire period of the month and shave it off at the end of November. This is supposed to help men feel what it would be like to have to shave off a part of their body that is defining to their masculinity, as the other guys who go through treatment for prostate cancer would have to. The money saved from not having to groom the beard all month would then be donated to a good cause, mostly encouraged towards cancer research. But NO-SHAVE MOVEMBER has over time become a fashion statement and the prostate cancer awareness intention has become background noise to the initiative.

Coincidentally, November is also the month dedicated to discussions on Mental Health Issues among men.

Almost 500 people were reported to have killed themselves in the three months to June in 2021, more than the whole of 2020, according to the Kenyan police. The youngest person to take their life was nine years old; the oldest 76. The 483 deaths recorded during the period were a marked increase on the annual average of about 320 cases, reported by the Ministry of Health.

As a brand with men making up over 60% reach and community online, we found it important for Ketepa, one of our clients, to jump on the NO-SHAVE wave for the month, to try and amplify national awareness not just around prostate cancer, but also Mental Health among its male customer base. It would also serve to provide men with an open platform to discuss the topics that they are usually uncomfortable to have, beyond Prostate Cancer and Mental Health. So we came up with a campaign dubbed TEA FOR MEN. 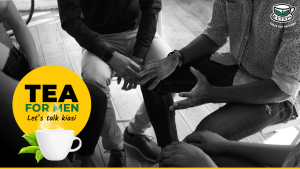 TEA FOR MEN was drafted to help plug the brand into the daily lives of the over 60% male customer base of Ketepa. It was important that TEA FOR MEN by Ketepa did not push a sale; and only allowed the conversation on men’s wellness to take place organically.

Our content and creative team at Belva Digital identified four key angles that this conversation would flow through:

We began by unpacking the conversation to Ketepa’s online audience through the lens of fatherhood, which is universally relatable. We then followed the fatherhood conversation with the other 3 topics across the month. This we followed through with subsequent posts on Ketepa’s social media channels.

Additionally, we identified an amplification opportunity on the new media angle by partnering with the popular Kenyan podcast – MICS ARE OPEN. This boosted visibility for the campaign even higher.

The TEA FOR MEN campaign by Ketepa ran between November 3rd and December 2nd 2021.

As the curve flattens, it’s time to think about growth